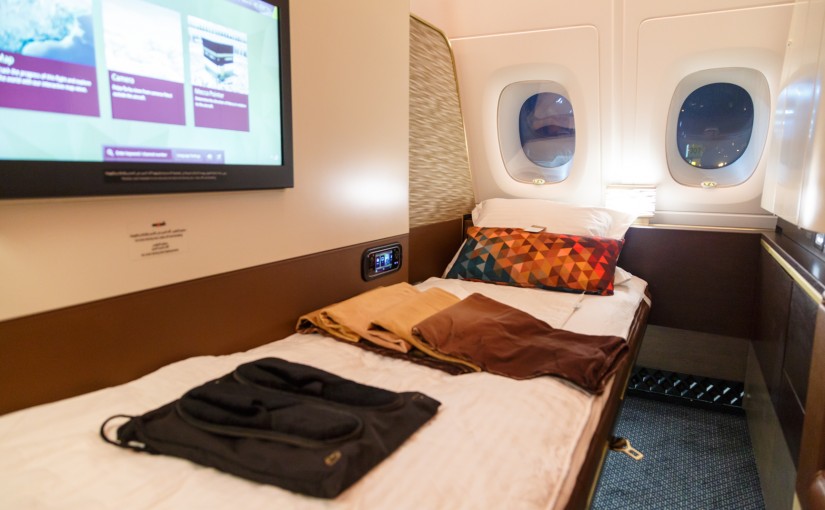 Etihad First Class Apartments is a revolutionary take on First Class for the A380. The Apartment features a luxuriously upholstered leather armchair and ottoman, which turns into a bed. Additionally there’s a vanity cabinet, mini bar, and a myriad of storage compartments. Quite unique is the onboard shower which you can reserve for your exclusive showering experience 30,000 feet above the ground. There are also all the other things you’d come to expect from Etihad First Class including attentive personalized service, a multitude of dining options, and a fully featured IFE. It’s quite an luxurious product, and I can see why the the cash price is $5,600 for this 13 hour flight.

The departure gate was 33 and I had just come from the Etihad Premium Lounge, which was a 2 minute walk away at gate 35. There was an additional security check since the flight was bound for Australia and afterwards I walked up the First Class ramp to the upper deck of the A380. I was warmly greeted by the flight attendant who showed me to my home for the next 13 hours, 2H. 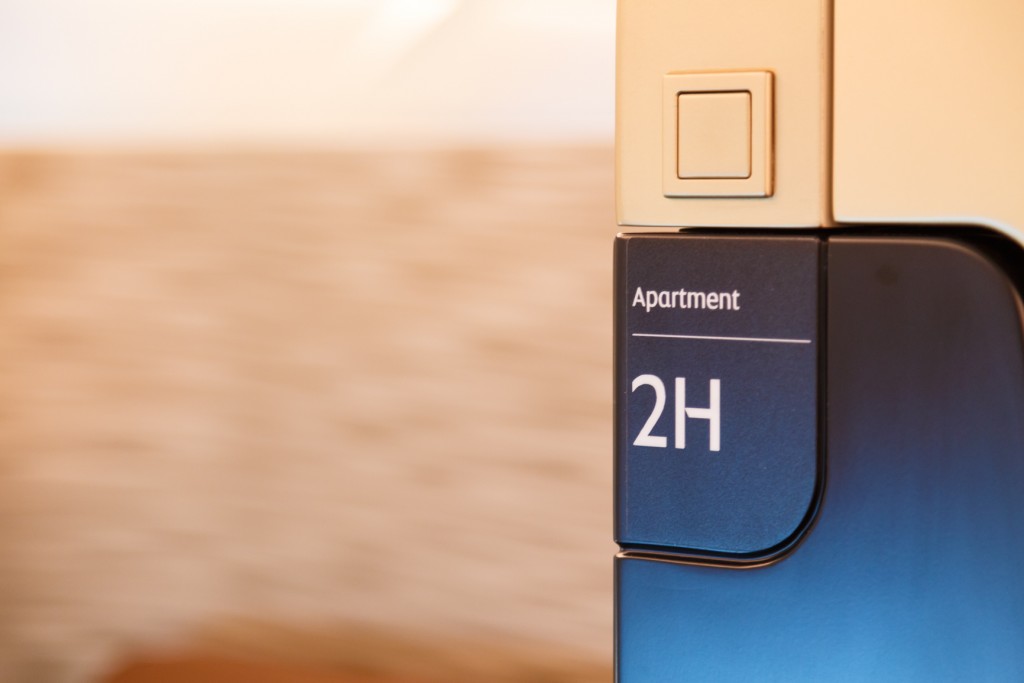 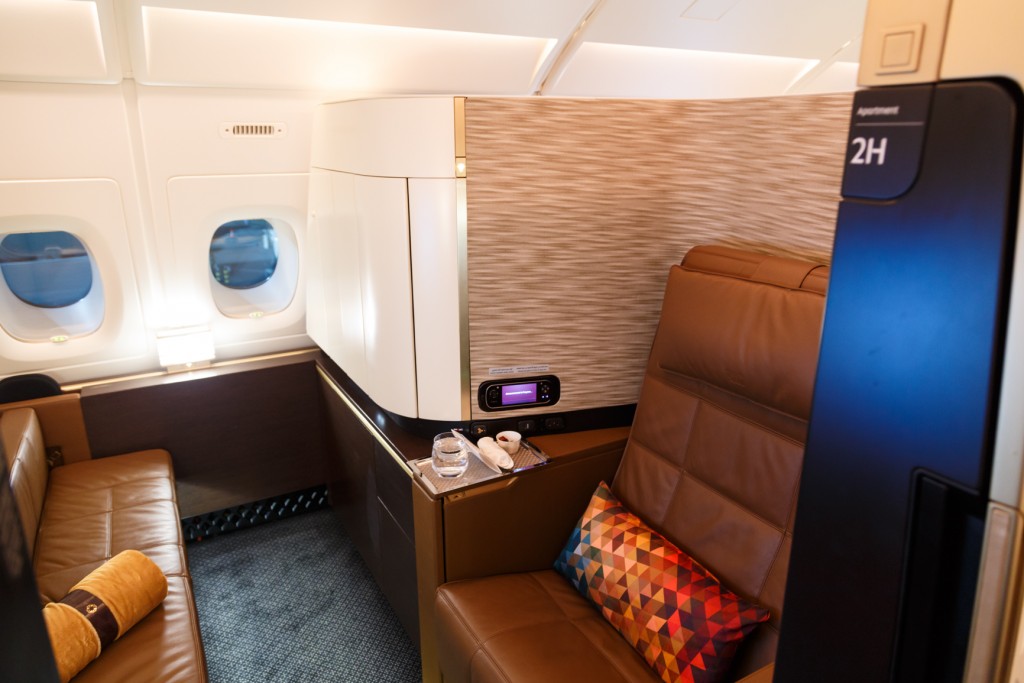 The Apartment is huge, perhaps excessively so. But that’s the point with Etihad. This is a no holds barred experience. Waiting for me on the armrest of the seat was a tray with a welcome drink, dates, and a note signed by the purser. The seat is very wide and can probably fit two adults. In addition to being adjusted in all the usual ways, there’s a massage function and a firmness adjustment. Dominating the Apartment is the ottoman/bed, which runs the width of it. There is also a vanity closet and hidden compartments everywhere. 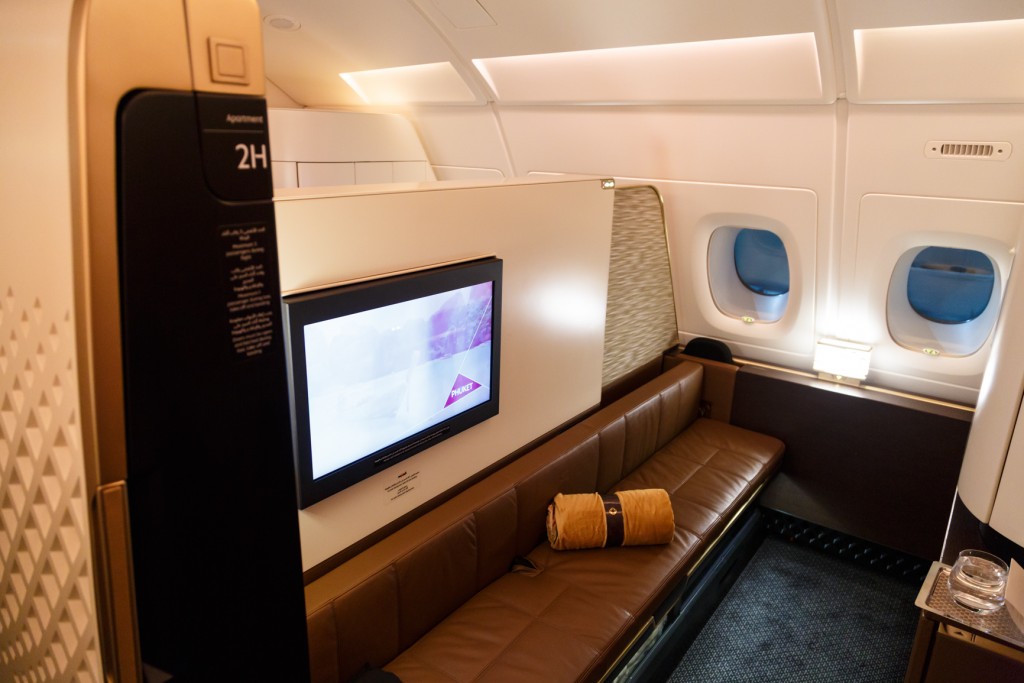 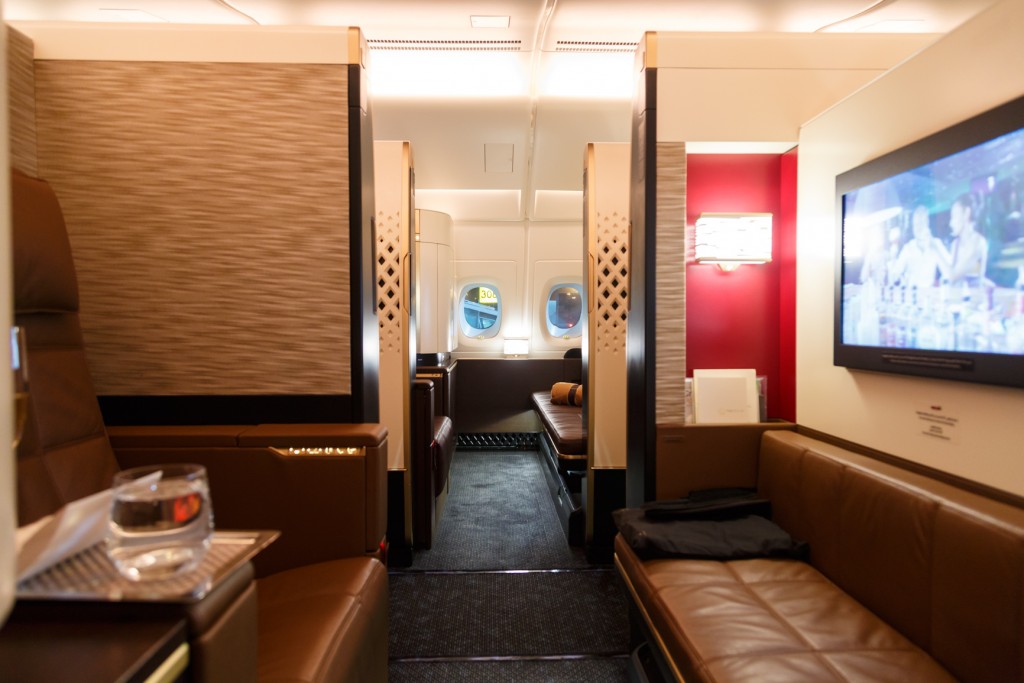 There are two remote controls, one at the seat and another at the bed, and the quality of them feels like that of an iPhone. You can actually have independent programs running on all three screens (2 remotes + IFE). And everything feels brand new. The quality of the hard product, especially the leather upholstery, feels so luxurious and refined. It’s the finest I’ve experienced.

The level of privacy is also unparalleled, with two sliding doors, someone would have to peer into the diamond holes or hop above to see into your Apartment. 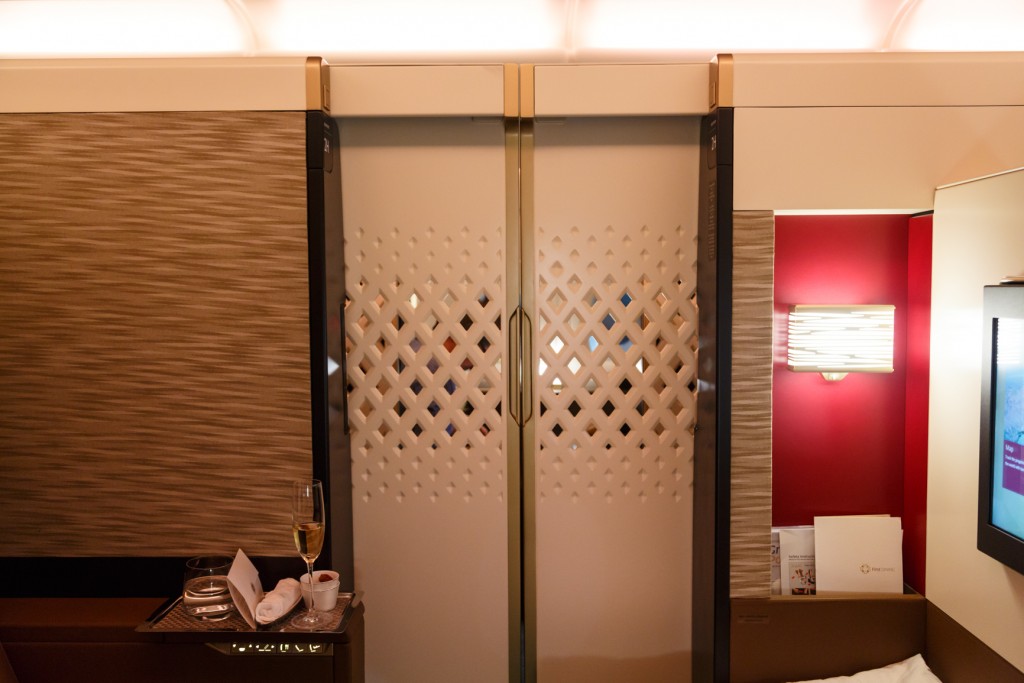 The cabin is equally gorgeous and has 9 Apartment total. The even-numbered ones are forward facing, while the odd-numbered ones are rear facing. The difference is negligible once in flight. At the ends of the single aisle, there is a shower room and a large bathroom/changing room in the front and a lounge in the rear. 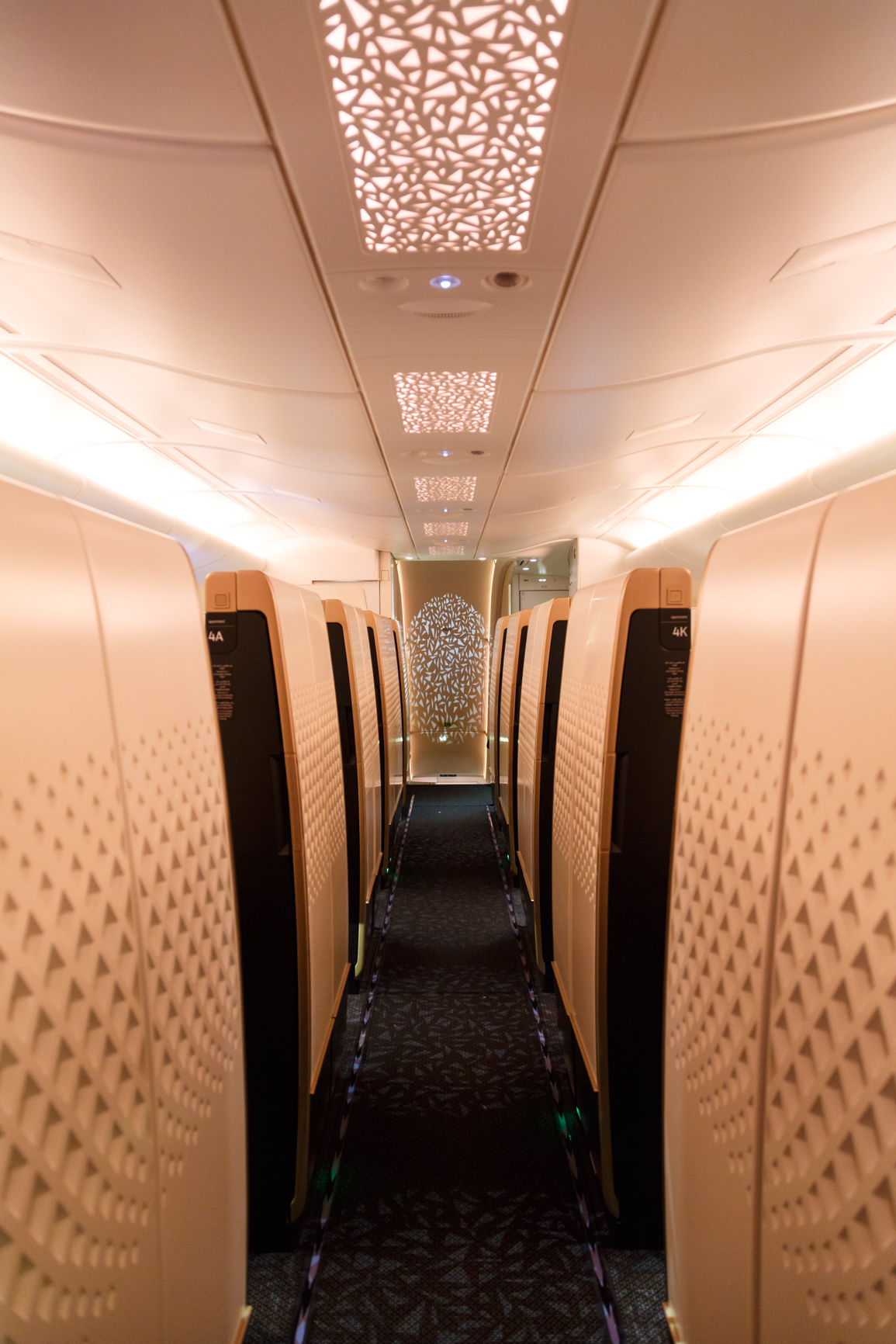 The shower room has a standing shower, sink and toilet. The use of the shower is on a 30 minute reservation basis for 5 minutes of hot water. There is also an incredibly generous bathroom next to the shower room which can be used for changing. 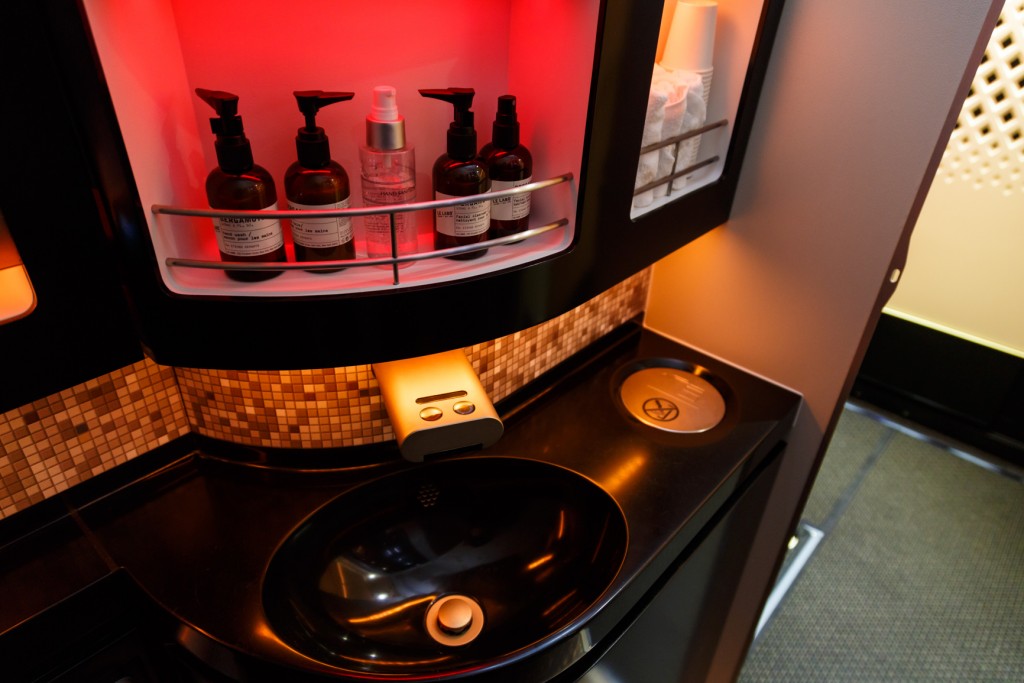 On the opposite end of the cabin is the galley and a lounge separates Business and First class and passengers from both classes can use it. There’s a table that extends upwards from the floor in the middle of the two crescent couches. 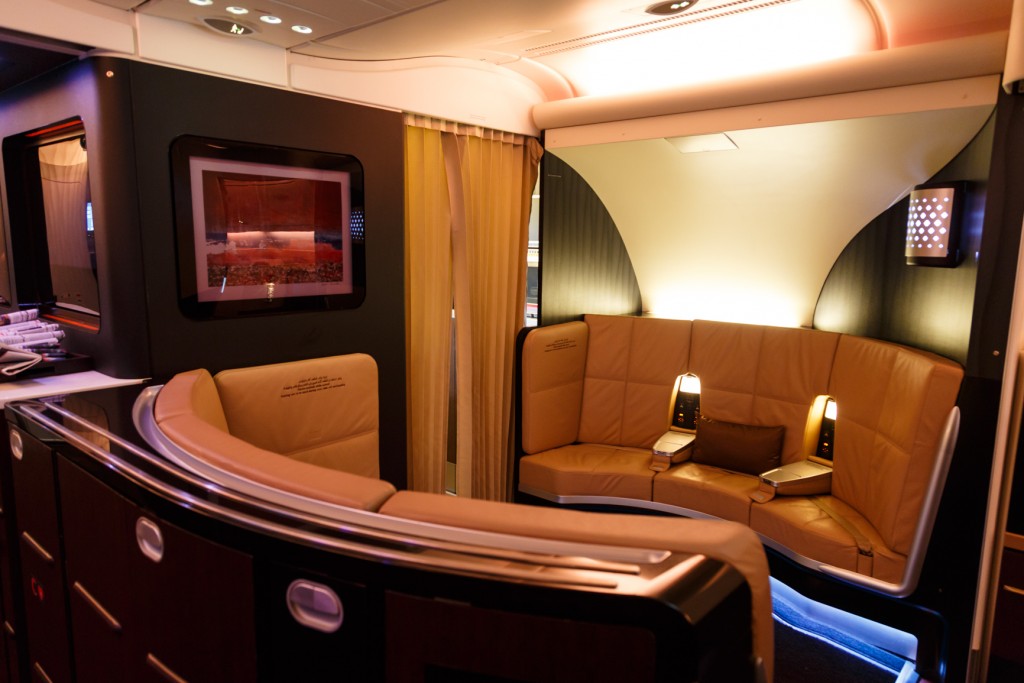 Dining is at your seat with a generous table that opens horizontally then vertically. The menu is almost identical to the one for the 77W and A340 First Class Suite product.

We started with the amuse-bouche and I ordered the Spinach Lentil Soup, the Alaskan Crab Duo, and the Grass-fed beef tenderloin with vegetables and veal jus. This was accompanied with the Line 39 Pinot Noir, Central Coast, California 2013. For desert, I had the taster which included a hazelnut cake, ginger yoghurt mousse, and an apricot bar.

Although the presentation was excellent, the food left something to be desired. I really liked the crab, the steak was juicy but too salty, and the deserts were alright. Nothing very memorable except the crab duo.

Breakfast was actually quite bad. The pastries were hard, sausage looked very unappetizing, and the only thing edible was the fruit and yogurt. Ordered a Nasi Goreng with chicken satay to tide me over, but that was too salty. 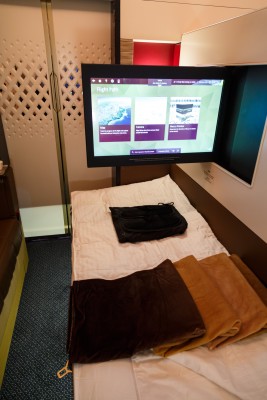 The FA had suggested that she made the bed before takeoff so I could go to bed shortly after dinner. This was the most elaborate turndown service I’ve seen on a plane.

The bed is long but actually very narrow. Although I’m pretty skinny, at times my arm fell off the bed. I think this is a major oversight and in fact I think the seat & bed is more of a gimmick than a practicality – you just would never need both a bed and a seat simultaneously. I prefer the traditional combined bed and seat since it’s wider and I don’t fear falling off. 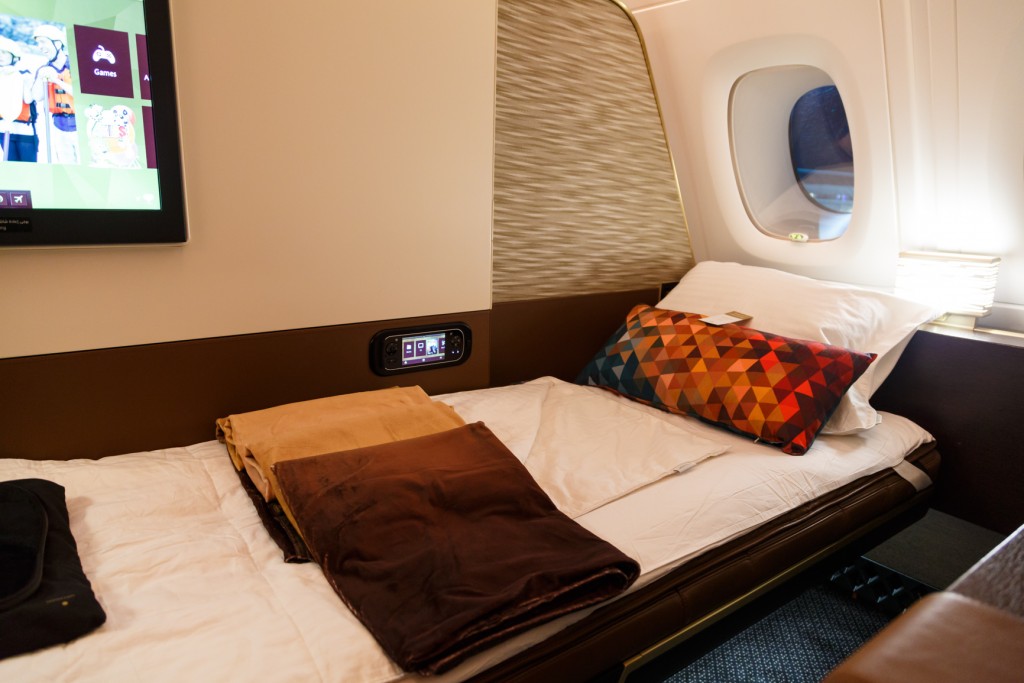 The flight attendant brought me the bad news shortly after breakfast: the shower was broken. I honestly thought this was a joke at first, but she explained that after “preparing the shower” for me, the water wouldn’t flow. This was the second plumbing issue after the motion-sensor sink stopped working and had to be reset. I tried to make the best of it and just said “next time.”

However, an hour later she came back and happily announced that the shower had been fixed! There was a towel and Le Labo toiletries that she prepared. I stepped inside, closed the door and pressed the button to start the water.

There is a control nob for the temperature and a 12 bar timer counting down the time before the water runs out. I finished after a few minutes with 2 red bars left. The shower felt pretty normal actually. Temperature and pressure were what I’m used to and turbulence was well tempered. In the end, I think it’s more of an over-the-top luxury that I’ve come to expect from Etihad than an actual necessity.

Compared to the Etihad First Class Suites product, pajamas and amenities are identical. The kit is incredibly comprehensive and all exposed for you in the vanity cabinet. 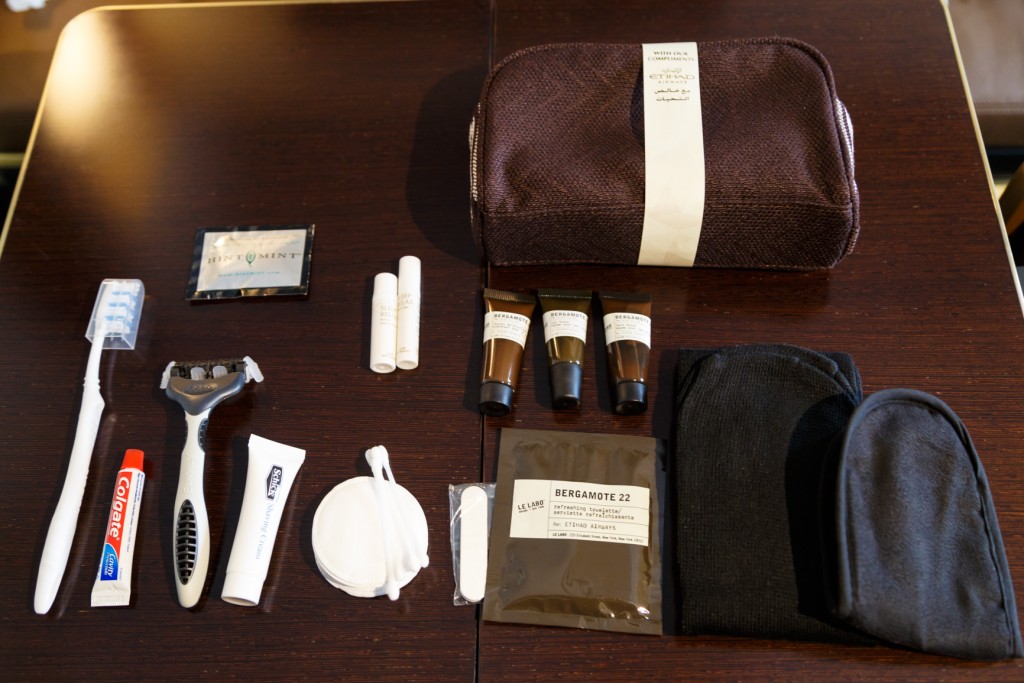 My main gripes were the food and the narrow bed, but after 13 hours I didn’t want to get off the plane. This has been the most luxurious product I’ve flown in terms of extravagance and refinement. The hard product feels incredibly solid and brand new, and is much more than I could ever need. But that’s the point. Never before have I had a shower onboard a plane. The cabin’s two FAs has been amazingly warm and accommodating, a service I will not forget.

Currently Etihad flies the A380 with the Apartments from their hub in Abu Dhabi (AUH) to London Heathrow (LHR), Sydney (SYD), and New York (JFK), with future service to Melbourne (MEL) and Mumbai (BOM). I wanted the flight from Abu Dhabi to Sydney in particular since it’s the longest Apartment flight offered and I got the ex-AUH experience.

This flight was part of a larger American Airlines award redemption from Muscat to Brisbane at a cost of 60,000 miles and $53.20 in taxes/fees. The tricky part is to find award availability. You’ll need to frequently check Etihad’s website and search “First” as the class of service and hope that “Guest First” comes up as available. It’s really a matter of luck and persistence, but believe me, it’s worth it.